VitaNavis Blog > All Blogs > Career Assessments > Could It Be? The End of the SAT.

In the past few months, thousands of SAT/ACT testing sites shuttered their doors to enforce social distancing and ensure the safety of both test takers and proctors. As the days turned into weeks turned into months, the opportunities to take college entrance exams grew slim. Students, teachers, and colleges began to grow very antsy. When would students be able to take their entrance exams?

After a month or so of waiting, colleges began dropping their SAT/ACT requirements as they realized it would be difficult for rising seniors to take the test. Highly selective institutions such as UCLA, Williams College, Johns Hopkins, and Northwestern University released statements explaining their flexibility in requirements during these uncertain times by going test-optional. Test-optional meant  students could submit SAT/ACT scores if they had it but apply anyway if they didn’t. Even all eight ivy league institutions went test-optional for the 2021 cycle. Some colleges even mentioned continuing their test-optional standing well beyond this upcoming cycle, including Harvey Mudd College, Oberlin College, and Tufts University. 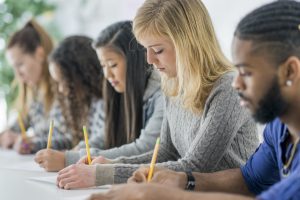 While the decision to go test-optional may seem abrupt to some, it actually reflects a growing consensus in favor of alternative ways to understand a student’s abilities. Education Dive stated, “The coronavirus has shifted the already accelerating test-optional movement into warp speed.” In other words, coronavirus helped many institutions take a leap in the abyss they stared at for many years. Many institutions are well aware of the dearth of information surrounding the ineffectiveness of standardized college entrance exams. Many studies point to the fact that tests like the SAT and ACT do not measure intelligence or ability but instead measure wealth and privilege. In fact, one study found that transcripts were a better indicator of student success than the SAT or ACT, especially for students of color. Coronavirus simply exacerbated a long withstanding issue within higher education.

Even as we look toward a test-free future, some believe that the SAT and ACT should not be so easily discarded. The College Board is well-connected. According to NPR, high schools in many states pay for their students to take the SAT or ACT. In fact, Tennessee requires students to take the ACT to graduate. Similarly, one of the Florida’s largest scholarships funds, Florida Bright Futures has a minimum SAT/ACT score to receive a 75 or 100% scholarship to any public college in the state. Even institutions that do not require a minimum SAT score, such as community colleges, use SAT/ACT scores to determine the class-level a student should take. 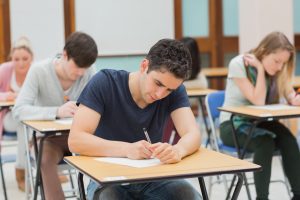 Senior Fellow at Stanford’s Hoover Institution Chester E. Finn, Jr. warns that standardized tests provide much needed uniformity across a heterogeneous country. He believes that a lack of standardized testing, including college entrance exams and end of year exams will lead to a “dearth” in data for the 2019-2020 school year. Finn also mentions the importance of testing as a way to hold teachers and students accountable for their learning outcomes. He posits that educators were initially adverse to the rise in testing as it caused them to be “judged and also have their schools judged.”

However, Finn’s claims are in direct opposition to a study released by the Harvard Kennedy School. Despite some students showing improvement on tests when teachers were compensated based on testing results, the study as a whole “largely [failed] to support consistent positive effects of financial awards for teachers in this district.” Another study performed by Vanderbilt University found similar results. They found moderate increases in student test scores when teachers were paid commensurate to student performance. The researchers of this study, however, reference other studies that found no correlation between merit pay and student achievement.

Additionally, he states that the removal of the SAT will lead to more “corruption” throughout the admissions process as decisions begin to skew subjective rather than objective. Students with robust extracurriculars, trips abroad, and grade inflation will disequilibrate opportunities for low-income students who may not have the opportunity to travel to Cambodia and build a hospital. 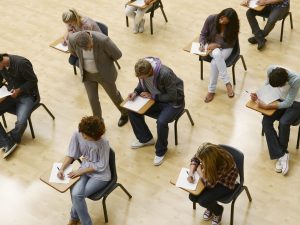 In spite of his assumptions, over 360 college deans across the United States released a statement detailing what they are looking for on a student’s application. In it, they encourage students to practice self-care. They also mention the importance of family contributions at this time, stating: “Far too often there is a misperception that high-profile, brief forms of service tend to ‘count’ in admissions while family contributions—which are often deeper and more time-consuming and demanding—do not. Many students may be supervising younger siblings, for example, or caring for sick relatives or working to provide family income, and we recognize that these responsibilities may have increased during these times.” The statement goes on to ask students to be champions of their communities in the best way they can while allowing themselves the grace to get through a difficult time.

From what it seems, coronavirus has rejected our notions that we need a standardized test to measure student achievement. Only time will tell whether or not that’s true.