The words “uncertain” and “unprecedented” have become emblematic of 2020. As coronavirus continues to shape our reality, students have had to adapt in many ways. From sudden online learning to the very possible chance of a hybrid learning experience next year, students have jumped, weaved, and pivoted with the constantly changing educational structure. The tumultuous experience couldn’t have been easy. But there are two quality traits, two ways of thinking that embolden students no matter the circumstance. When married together, these are qualities everyone can benefit from—especially students learning through times like these.

The Learning Scientists defines grit as “a student’s ability to persist after setbacks.” At the heart of grit lies perseverance and self-motivation. Students who have grit are more likely to bounce back and continue their studies despite adverse circumstances. According to an article for the Association of Psychological Science, students with high levels of grit tend to have similar attributes. These students have a “general tendency to be reliable, self-controlled, orderly, and industrious, with its emphasis on long-term stamina rather than short-term intensity.” 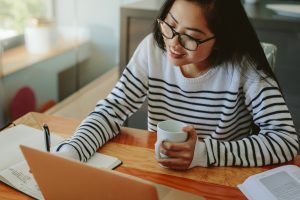 While abstract nouns and adjectives provide a general understanding of the concept of grit, one major detail sets grittier students apart: time. Gritty students will spend hours trying to understand a concept, lesson, or teaching. This behavioral mechanism is called “deliberate practice.” In the same article, writers Angela Lee Duckworth and Lauren Eskreis-Winkler cite a study they perform about gritty students’ habits. They examined the habits of Scripps National Spelling Bee finalists and “found that grittier children completed more hours of deliberate practice, operationalized as the study and memorization of word spellings and word roots in solitude.” In fact, those students did better than students who performed more “fun” ways of studying. Students needed to put in the tedious and mentally challenging work to be successful. Not only were these students putting in the work, they were putting it in where it counted most.

In addition to incorporating the notion of grit into their lives, students must also adopt a growth mindset. Simply defined, a growth mindset is “simply the belief that our basic abilities can be developed and improved through dedication and hard work” (according to Psychology Today). Students with a growth mindset do not believe that knowledge cannot change; they understand that anything can be learned or improved with time and practice—or grit. Conversely, students who believe that everyone possesses a natural level of intelligence that cannot be built upon or improved have a “fixed” mindset.

These two types of students approach their education differently, which affects how they understand themselves and the world. Students with a growth mindset understand that anything and everything is a learning opportunity. They are more willing to go outside of their learning comfort zone. Simply put, these students are not afraid to fail because they understand that failure is part of the learning experience. Meanwhile fixed mindset students are apprehensive to accept challenges where they may fail. This fear causes them to “exert less effort to succeed” (according to Fixed And Growth Mindset In Education And How Grit Helps Students Persist In The Face Of Adversity). 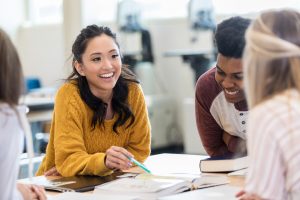 The matter of motivation: Striatal resting-state connectivity is dissociable between grit and growth mindset examined how the brain chemically responds to both grit and growth mindsets. One of the most interesting findings was how our brains respond to the notion of grit. “Grit was related to positive functional connectivity between vStr and a medial prefrontal network. These medial prefrontal regions include the rACC and portions of the mPFC ( Öngür et al. , 2003 ), which project to the ventromedial striatum and are related to the prediction of reward.” In other words, the parts of the brain that react to the notion of grit are the same parts of the brain that are related to rewards. Even students’ brains understand that working hard when things are difficult will lead to a reward later on.

The positive effects of grit and growth mindset are unequivocal; but how do we instill this within students? Developing Grit In Our Students: Why Grit is Such a Desirable Trait, and Practical Strategies for Teachers and Schools by Jennifer Bashant, Ph.D., provides some tools to help teachers and parents alike understand the best ways to instill these qualities. She suggests a number of tools but stresses the importance of culture. Teachers and parents alike must reinforce the value of attitude and persistence. Parents and teachers must reward hard work and the delayed gratification of understanding a concept after many hours of studying by placing an emphasis on “practice and action.”

Grit and growth mindsets are huge catalysts for change within students’ interpretation of their abilities and potential. And the best part is, this idea can be instilled within a student’s mind at any time—and especially during unprecedented times where learning has become increasingly difficult. It is as simple as helping students see the potential we see in them every single day. As ardent supporters of the “you can do anything you put your mind to” concept, we have to ensure our students know that too.