Should We Cancel Student Debt?

VitaNavis Blog > All Blogs > Uncategorized > Should We Cancel Student Debt?

It seems as though the 2020 election had a hot button topic for everyone. Candidates from each party invigorated their base by making bold speculations and impressive promises to fix nearly every facet of the country. On the democratic side, many candidates including Senator Bernie Sanders and, now, president-elect Joe Biden pledged to find a way to cancel student loan debt for millions of Americans. These ideas energized particularly younger voters crumbling under the weight of large student loans. For millennials, specifically, this promise could provide a sense of freedom. In “Meet the average millennial,” an article published in Business Insider, the average millennial is financially behind due to a slowing economy, lower wage rates, and crippling student debt. As a result, “Students want Biden to make good on his pledge to launch a student loan forgiveness plan – and they want him to do it quickly” (according to CNBC). As Biden takes office, many students will be watching.

In the last week of 2020, Biden announced his pick for the Secretary of Education, Miguel Cardona. Among the many, many items on Cardona’s to-do list is how to go about the cancellation of student loan debt. While Biden’s formal plans are not public, he has publicly supported policy that would forgive the first $10,000 in student loan debt (according to Vox). However, other democratic politicians have called for canceling anywhere between $30,000 to $50,000 worth of debt per borrower as reported by “Americans Have This to Say About Cancelling Student Debt.” Biden has also discussed expanding income-based repayment programs, similar to an Income Share Agreement. 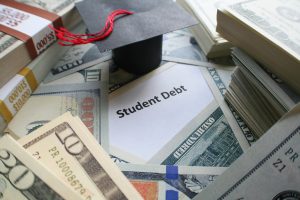 However, the mere subject of student debt cancellation is still contested. Only 56% of Americans support federal loan forgiveness. While the number is more than half of Americans, it still does not represent an overwhelming majority. For many, the question remains: why should the federal government forgive students’ debt? Biden’s camp envisions it as a step toward economic stimulation and mercy for the unforeseeable events of 2020. Others see it as an opportunity to provide equity to those traditionally disadvantaged.

“Because of centuries of racism, Black households have less wealth to draw on when paying for college, which pushes Black students typically to borrow more than their white peers, experts say. In addition, because of labor-market discrimination, among other structural issues, Black borrowers likely don’t have as high salaries to work with when paying off their debt” (according to Market Watch).

Additionally, the Center for American Progress found that first-generation—usually more likely to be low income—students are also the most likely to default on their loans as a result of wage gaps. They also found that “Repayment solutions fail the nearly one-half of African American borrowers who default on their loans.” The report goes on to suggest a more modern way of repaying loans, similar to the income-based repayment plan president-elect Biden has suggested. Eliminating loans may take one step closer to providing an equitable solution to those who face unequal circumstances in their lives. It may supply the much needed relief to communities most burdened by student loans.

However, canceling student loan debt does not just help marginalized students and communities, many believe it may propel our economy. According to the study Marriage, Millennials, and Massive Student Loan Debt, young people are foregoing larger more traditional milestones due to their financial circumstances. Researcher Victoria Haneman posits that student indebtedness has a large effect on the economy: saving, investment, and consumption cowers in the face of a massive $1.2 trillion student debt crisis. In other words, many borrowers put their life on hold to pay off their loans. 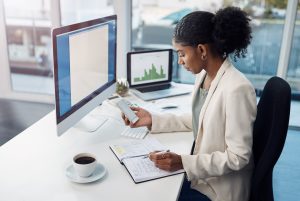 For example, Haneman reports, “if a borrower opts into an income-based repayment plan to manage student loan debt, marriage generally means that the repayment burden will be (perhaps significantly) higher. The added burden of factoring a non-borrowing spouse’s income into student loan repayment may cause the cash-strapped borrower.” Reasonably, this may cause a person to prolong marriage.

The Federal Bank states student loans have slowed the housing market as well. In fact, “400,000 borrowers who could have owned a home by 2014 but didn’t because of student loans,” reported The Wall Street Journal. Naturally, students with large loans will avoid accumulating more debt by purchasing a home. Some people, like Bharat Ramamurti, a member of the Congressional Oversight Commission, believe that canceling student debt entirely could “translate to an increase of $86 billion to $108 billion a year, on average, to GDP,” according to Business Insider.

However, the question of how to pay for debt elimination still stands. How president-elect Biden and Cardona plan to pay for student loans will have a large effect on its impact. While we continue to wait for a more concrete plan, we can expect some positive effects on the students and the economy as a whole, including a more financially liberated younger generation of graduates.

Should We Cancel Student Debt?